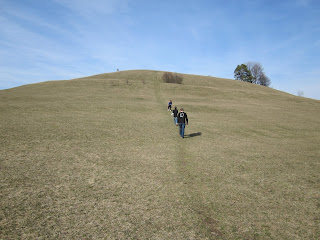 The German word Zeitraum literally means time-space or Era, period of time. But I prefer the direct translation. The space of time. What a cool concept.

Time I finally had on our trip to Amsterdam, Germany, France and the Czech Republic.  Time to think about life, work and what it all means.  Did I have any breakthroughs?  Only time will tell.  When I look back and notice a shift in my way of living.  I guess the word 'when' proves a certain optimism...
My kids got to see their grandparents. Zeitraum. Emotions.  Life is precious. How did we all fare?  Surprisingly well.   And what does all of that have to do with design? I haven't the foggiest idea, to paraphrase our British brethren... 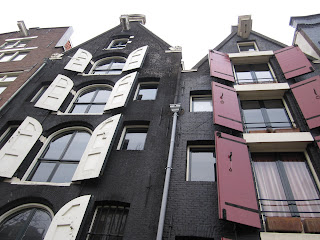 Amsterdam. A much too long flight. A tram ride into town. A brisk, sunny spring morning. A cigar. A beer in a cafe. And a lot of walking...   Adena tries to combine two menu-items (American-style). Not in Europe I thought. She gives the stout waitress a devastated look. The waitress caves and serves the 'Unikat'. Cullinary imperialism by a seven-year old.
Nadav and Jessica go to see Anne Frank's house.  While Adena and I built sand-castles in a verboten construction zone. A canal barge battles the gusty wind in her effort of docking next to us.

A deck-hand in a snug uniform and captain's hat handles the docking lines with military precision. These Central-Europeans are just too tightly wound. We watch the passengers drink their Amstels while they stare back at us... 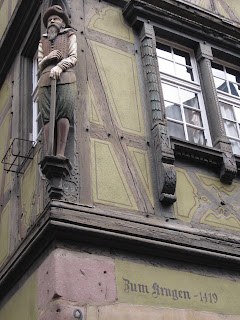 Deutschland.  My brother is getting married. We are close. Despite the distance. I meet his wife at the wedding.  She is lovely and they are in love. I'm honored to be his best man.

We show the kids Tuebingen, an old University town close to where I grew up.  They love the castle and are amazed by the old houses and the mazes of 'Gassen' (lanes).  My dad loves being a grandparent. Zeitraum. It starts raining.

I lived in Tuebingen for two years. It's old and liberal, funky artsy.  In a German way.
We spend time at my cousins's house, my aunts' and my sister's.  We are fed almost to the point of platzing.  It's wonderful to see all of the children together.  Nadav shoots a bb-gun, sets off fireworks, climbs on top of roofss, falls in the creek I fell in when I was a kid. Adena catches over two dozen newts. All without any adults being nearby.  Life the way it used to be. Nadav already wants to go to Europe by himself and stay with his cousin Louis. In a few years for sure. 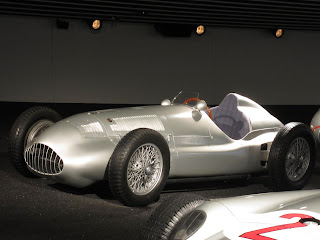 Back to design!  My parents took us to the Mercedes Benz Museum.  An interesting building.  Not beautiful. A bit heavy-handed. Sleek gone clumsy. Like the cars. Except for the 'Silberpfeil' (silver-arrow) on the left. I secretly hope that this generation of cars gets revived at some point.  The simplicity. The raw and throaty sound. The vibration. The air in your face. Sort of like a four-wheeled Ducati...
It was interesting to see what insane variety of vehicles MB has manufactured.  And what indelible spirit it must have taken to build such an empire.  I was in awe just looking at space after space filled with one engineering marvel after another.  I still think though, MB should have spent the money on hiring some Italian designers to help make their aesthetics more palatable! 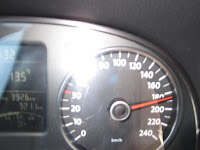 Ahhh the pure joy of relentless speeding on the Autobahn. I tried hard, with the whole family egging me on, to reach 200 km/h (125 mph!) on our side-trip to Prague. Our little Volkswagen Polo however, could not reach that speed on the flat, and the downhill portions were either too short or crowded with Audis and BMWs going much faster, to get enought momentum going.  But we got close, and that's what counts.
Nadav in particular LOVED going fast.  Although, after going around 100 mph for an hour or so, the novelty wore off...
Prague is unbelievably beautiful. 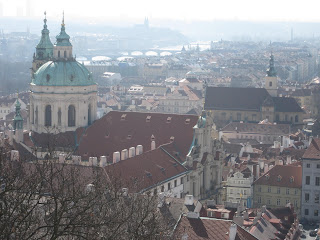 Honestly. Block after block of beautiful old buildings.  Architectural eye-candy.  Our hotel was centrally located and we spent 2 days walking all over the old city.
Hitler apparently loved Prague and therefore did not bomb it in WWII. Therefore it has a vast treasure of intact old buildings and a surprising wealth of jewish artifacts beautifully preserved.
And some newer ones: 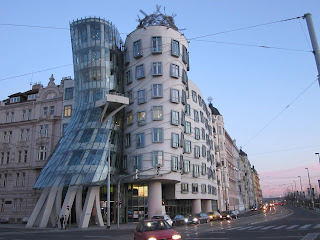 Jessica and I were underwhelmed with Gehry's Nationale-Nederlanden building, also known as the dancing house and also  known as the drunken house...
While neat at a first look, it seems a bit contrived. However, I still prefer a building that conjures up an emotional response, be it positive or negative, over a building that causes none at all.
I loved the gothic and baroque architecture. My former self would have been appalled by such a statemen, the purist modernist I was in school. But while I still love modern architecture, I am able to appreciate other styles. 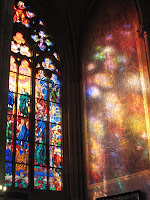 Sunlight falls through the stainglass window on the left and lights up the mosaic on the right. Seriously, the window alone would have been enough! This is in the St. Vitus Cathedral, which stands inside the castle complex. I could easily spend several weeks in Pague, just exploring this magnificient city.  We drove south from Prague to see some of the country-side and also to visit the city of Strakonice, which has a connection to our community here.  Finally it was time to head back Germany. As we left the Czech Republic, we passed some young women working the street just before the German border. They were much too lightly dressed for the cold temperatures.  It filled me with deep sadness to see them on this freezing, lonely stretch of road. 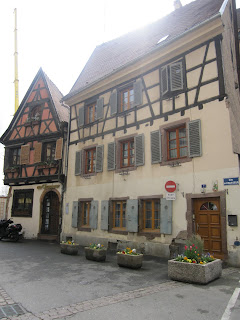 From Germany we took a side-trip to Colmar, which is on the French side of the Alsace region, famous for its wines and picturesque villages.  We didn't get to sample the wines, but found some wonderful crepes and other foods.  Another interesting side-note of this trip was a brief introduction to German pre-fab houses, but that will have to wait for another post...  In reflection of this trip, several things struck me. Most of all, I loved sharing my heritage, my family and the wonderment of traveling with my children.  I was also very impressed with Prague's architecture.  I honestly did not expect all that much and was blown away. I was fascinated by the German building technologies, which are so advanced, and the whole system of pre-fab building was way cool. Also all the ways of retrofitting existing building that are centuries old. Altogether it was a great trip. I wish it had been in the summer, so the kids could have spent more time outside and in the pool. And, of course, I wish I could have gotten some sailing in.  But then again, maybe next time...
(Photos by Jessica Wichmann)
Posted by efraim at 10:09 AM 2 comments: